Another sensational discovery has been made by paleontologists from Argentina who have come across the fossilized remains of a new species of Dinosaurs. 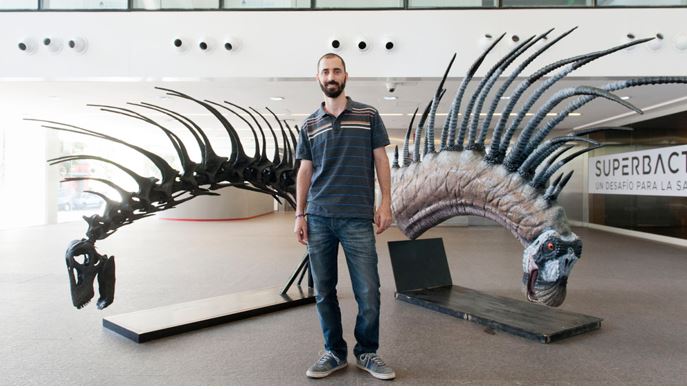 A researcher from CONICET posing with the replica of the new Dinosaur. Image Credit: CONICET.

Fossils of a new species of sauropod, characterized by long spines bent forward in its neck, have been identified in Argentine Patagonia by paleontologists.

Called the Bajadasaurus Pronuspinax, its name that comes from the region it was discovered, which is known as Bajada Colorada.

The newly-found species belongs to the family of the dicraeosaurids and is distinguished by long spines that cover its neck and back as a continuation of its vertebrae. The creature is thought to have lived at the beginning of the Lower Cretaceous. more than140 million years ago.

The discovery of the Dinosaur was reported in the journal Scientific Reports by a team of paleontologists of CONICET (an Organization dedicated to the promotion of science and technology in Argentina), the Maimónides University and the Ernesto Bachmann Paleontological Museum.

A replica of its massive, spiny neck is exhibited in the Cultural Science Center in Buenos Aires.

“We believe that the long and sharp spines—very long and thin—on the neck and back of Bajadasaurus and Amargasaurus cazaui (another dicraeosauridae) must have been to deter possible predators,” explained Pablo Gallina, who is an assistant researcher at the state council of scientific and technical investigations (CONICET) and Maimonides University.

Dicraeosaurids are usually characterized by having a relatively small body size, with short necks, and extensive neural spines. Reports suggest that these dinosaurs were between 10–13 meters in body length.

“We think that had they been just bare bone structures or covered only by skin, they could have been easily broken or fractured with a blow or when being attacked by other animals,” Gallina added. “These spines must have been covered by a keratin sheath similar to what happens in the horns of many mammals.”

Some of the hypotheses formulated indicate that Dino’s spines served as a support to regulated the body temperature of the dinosaur or even to make it more sexually attractive to a potential mate.

It has also been speculated, for example, that these species might have had a fleshy hump among the spines that served to store reserves, a similar role to that of a camel.

“Studies suggest this animal spent much of its time feeding on ground plants while its eye sockets, close to the top of its skull, allowed it to key an eye on what was happening around it,” explained experts from CONICET.