We all know the history of the asteroid that slammed into the Earth some 65 million years ago, and that the resulting blast killed off most of the dinosaurs and many other species. But did you know that this asteroid might cure cancer?

The initial impact was an extinction level event. We know this because scientists previously found evidence of this asteroid across the Earth in the form of rings in the soil and rocks that contained elements that only come from asteroids and comets. Then came the satellite confirmation of an asteroid or meteor impact just off the coast of Chixualub, Mexico.

What scientists recently discovered is that the same asteroid that killed off life all those millions of years ago also contains an element that can kill cancer cells — effectively, it might cure cancer. Well, not exactly, but combined with other elements and molecules it can.

The metal in question is called iridium. It’s only here on earth because it came from the asteroid that killed off the dinosaurs. And it’s only available in sparing quantities. It works by combining the iridium with a protein in the blood called Albumin and then blasting it with light. Doing this seems to allow the iridium to attach to the cancer cells’ nuclei and destroy them. 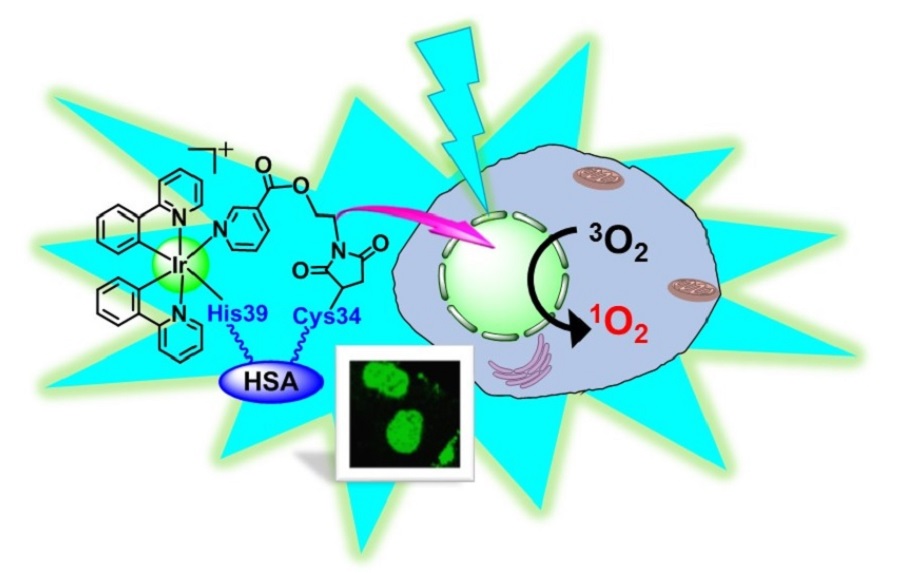 The light in question will be blasted into the cells using optical fibers, which – when applied correctly and selectively – should leave surrounding healthy cells alive and well. They would be completely untouched, in other words, and this should leave the surrounding cells in the patient in question in a much healthier state after the treatment is complete and the cancer cells destroyed.

University of Warwick researchers are responsible for the findings, of which the science behind them is called Photodynamic therapy. This therapy happens when certain molecules produce oxidizing agents after being exposed to light. According to Warwick University’s Professor Peter Sadler, the iridium performs this oxidation very well when exposed to light.

This means that if researchers can figure out how to do it, they hope they can turn this method into large-scale cancer treatments.

Of this potential for treatment, Professor Sadler said:

“It is amazing that this large protein can penetrate into cancer cells and deliver iridium which can kill them selectively on activation with visible light. If this technology can be translated into the clinic, it might be effective against resistant cancers and reduce the side effects of chemotherapy.”

Iridium doesn’t attach to the blood proteins by itself, however. The Warwick researchers used a chemical coating to bond the two, causing the combined compound to glow brightly. This allowed the researchers to follow the way the iridium and Albumin entered the cancel cells.

According to the report, because it’s possible to apply the potential treatment to localized areas in “small doses,” it’s potentially on track to clinical trials.

Whether in large or small doses, the potential to cure cancer with this treatment leaves a few questions.

For instance, with so many people diagnosed with different cancers, is there enough iridium to go around? This is an especially important question for those diagnosed with resistant, or terminal cancers. In other words, diagnosed with cancers in which survival isn’t likely, or is utterly impossible.

That’s a tough question to answer, since it’s very rare and only found in some small mines, as well as asteroid and meteor craters.

Currently, according to the report, humans can only mine about three metric tons of iridium each year. This is a very small amount compared to the gold we mine, for example, which we extract from the earth at 3,000 tons each year. All this iridium comes from natural deposits, and not the asteroid craters. The usual application for iridium is paleontological works, as well as its use in anti-corrosion applications, which works at extremely high temperatures.

Image by University of Warwick via IFLScience/Public Domain

Ultimately, if the researchers can figure out a way to make this new finding work on a larger scale, it’s possible we could finally eradicate cancer forever.

That would take making it through multiple rounds of rigorous clinical trials, and, finally, after what would be years of research and testing, approval from the Food and Drug Administration (FDA) for administration to human patients in a clinical setting. After all this work, it’s possible. Finally, we could have an actual cure for cancer. Let’s just hope that if it happens, we can find enough iridium to make it work.

View the Science Channel’s rendition of how the Chixualub impact happened here: