According to researchers, lost languages have been rediscovered in one of our planet’s oldest continuously used ancient libraries, located in Egypt.

Located deep within Mount Sinai in Egypt lies the Saint Catherine’s Monastery, a sacred Christian site, home to one of our planets oldest continuously used libraries where thousands of ancient manuscripts, texts and books are hidden.

“I don’t know of any library in the world that parallels it. The monastery is an institution from the Roman Empire that continues operating according to its original mission.”

To get an idea how important this library is, the monastery library preserves the second largest collection of early codices and manuscripts in the world, outnumbered only by the Vatican Library.

Some of these ancient manuscripts hide incredible secrets.

This allowed scientists to restore ancient texts that were written over in the distant past, in order to save on expensive, scarce parchment.

Researchers hailed the discovery at Saint Catherine’s Monastery on the Sinai Peninsula as a ‘new golden age of discovery’.

This resulted in long-lost languages coming to light after remaining lost for centuries.

Some of the languages were not seen since the Dark Ages, say experts. Rare languages have been found in ancient texts that date back to more than 1,500 years ago. While researchers also came across a number of original texts written in languages well known to historians—such as Latin, Greek, Arabic—others were inscribed in ancient, long-lost languages that are rarely seen in the historical record.

“The age of discovery is not over,” Michael Phelps from the Early Manuscripts Electronic Library in California told The Times.

“In the 20th century, new manuscripts were discovered in caves. In the 21st century, we will apply new techniques to manuscripts that have been under our noses. We will recover lost voices from our history.”

Among the lost languages, researchers came across a defunct dialect referred to as Christian Palestinian Aramaic: a mixture of ancient Syriac and Greek. The dialect is said to have been discontinued sometime in the 13th century and was rediscovered by scholars during the 18th century.

“This was an entire community of people who had a literature, art, and spirituality,” Michael Phelps, director of the Early Manuscripts Electronic Library said in an interview with the Independent.

“Almost all of that has been lost, yet their cultural DNA exists in our culture today. These palimpsest texts are giving them a voice again and letting us learn about how they contributed to who we are today.”

To discover the lost languages hidden because of palimpsest:– manuscript or piece of writing material on which later writing has been superimposed on effaced earlier writing, scientists photographed thousands of pages several times. They illuminated each page with different-colored lights. reports the Smithsonian. 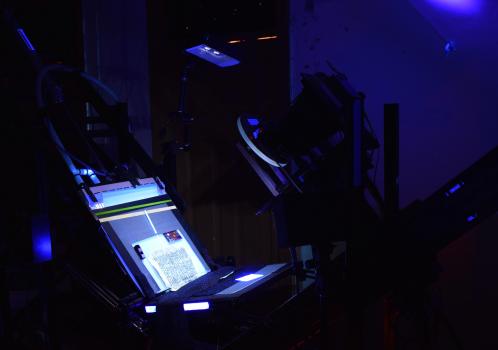 “At some point, the material the manuscript was on became more valuable than what was written on it,” Mr. Phelps explained. “So it was deemed worthy of being recycled.”

Furthermore, scientists also photographed the ancient manuscripts with light shining onto them from the read, and even from oblique angles, helping experts “highlight tiny bumps and depressions in the surface,” explains Richard Gray in an article for the Atlantic.

Researchers then incorporated the information they had obtained into a computer algorithm, which helped them distinguish the more recent texts from the originals.

Among other findings, experts have discovered what is believed to be the first-known copy of the gospels in Arabic and the earliest examples of known works from the Greek physician Hippocrates.