Mystery orbits in outermost reaches of solar system not caused by ‘Planet Nine’, say researchers, but by a massive debris disk ‘we can’t directly observe.’ 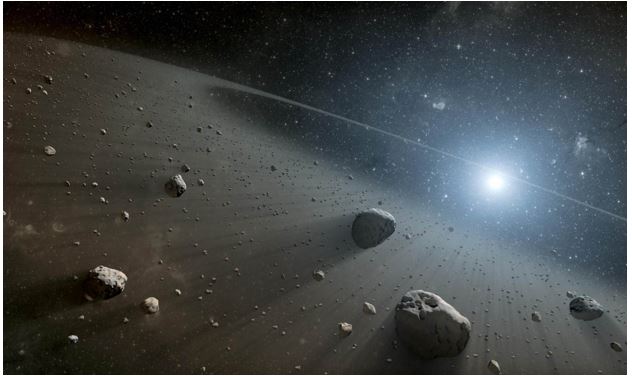 In order to explain the unusual orbits of two groups of objects (TNOs) that are located beyond the orbit Neptune, astronomers suggested the existence of the hypothetical Planet Nine in the confines of the Solar System.

However, a new study by researchers at the University of Cambridge (United Kingdom) and the American University of Beirut (Lebanon) has raised another explanation for this phenomenon which does not involve an elusive planet hiding beyond the orbit of Pluto.

As explained in a statement by Eureka Alert, the team of scientists proposed the existence of a huge disk formed by small frozen bodies, whose combined mass exceeds ten times that of the Earth.

Combined with a simplified model of the Solar System, the gravitational forces of that disk could explain the unusual orbital architecture exhibited by some of the so-called trans-Neptunian objects in their confines.

It is noteworthy to mention that such a theory is not new and that this study was not the first to explain the unusual orbits proposing the existence of a huge disk made up of smaller cosmic objects.

However, the new study was able to explain the particularities of these orbits, taking into account the mass and gravity of the eight planets of our Solar System.

“The Planet Nine hypothesis is a fascinating one, but if the hypothesized ninth planet exists, it has so far avoided detection,” said co-author Antranik Sefilian, a Ph.D. student in Cambridge’s Department of Applied Mathematics and Theoretical Physics.

“We wanted to see whether there could be another, less dramatic and perhaps more natural, cause for the unusual orbits we see in some TNOs. We thought, rather than allowing for a ninth planet, and then worry about its formation and unusual orbit, why not simply account for the gravity of small objects constituting a disc beyond the orbit of Neptune and see what it does for us?”

Observing the proposed disk is difficult.

Sefilian explained that the problem is that it is almost impossible to see this disc if we observe it from within the Solar System.

Despite this fact, we know that similar disks exist elsewhere in the universe, and we have even observed them as we explore the cosmos for new planets.

“When observing other systems, we often study the disc surrounding the host star to infer the properties of any planets in orbit around it,” said Sefilian.

“The problem is when you’re observing the disc from inside the system, it’s almost impossible to see the whole thing at once. While we don’t have direct observational evidence for the disc, neither do we have it for Planet Nine, which is why we’re investigating other possibilities. Nevertheless, it is interesting to note that observations of Kuiper belt analogues around other stars, as well as planet formation models, reveal massive remnant populations of debris.”